Meanwhile, Khau Pha pass is ranked one of the four most beautiful paragliding sites in Vietnam and the top 10 most beautiful paragliding destinations on the globe.
In 2019, Mu Cang Chai terraced rice fields were recognized as a special national relic site by the Prime Minister.
These titles continue affirming the role that the terraced rice fields hold in tourism development as well as the achievements gained by Mu Cang Chai in developing tourism in association with preserving and promoting the value of "golden terraces”.
To date, "golden terraces” in Mu Cang Chai basically formed two tourism seasons: "pouring water” season and ripe rice season, with "flying over pouring water season” and "flying over ripe rice season” paragliding festivals becoming an attractive adventure tourism type in the northwestern region.
Mu Cang Chai district has invested in developing infrastructure and planning of terraced rice fields, encouraged locals to engage in tourism activities, promoted the image of Mu Cang Chai through different channels to popularise the beauty of terraced rice fields and make them a typical tourism product of the locality.
The district intends to make a dossier seeking UNESCO’s recognition  of Mu Cang Chai terraced rice field special national relic site as a world cultural heritage.
Thu Hanh 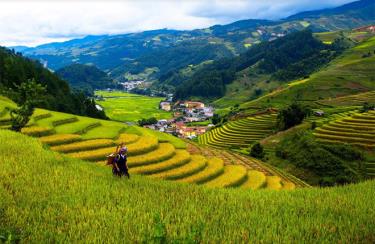