Vietnam and Cuba released a 12-point joint statement on the occasion of Vietnamese President Nguyen Xuan Phuc’s official friendship visit to Cuba from September 18-20 at the invitation of First Secretary of the Communist Party of Cuba Central Committee and President of Cuba Miguel Díaz-Canel Bermúdez.
The statement noted that the Vietnamese State leader held talks with his Cuban counterpart, while had meetings with President of the National Assembly of the People’s Power of Cuba Esteban Lazo Hernández and Prime Minister Manuel Marrero Cruz. The meetings took place in an atmosphere of friendship, comradeship and fraternity, a typical feature of the relationship between Vietnam and Cuba.
President Phuc also met with Cuban revolutionary leader General Raul castro Ruz, during which they highlighted the long-standing history and special characteristics of the Vietnam-Cuba ties, as well as the continuity of the close and trustful relations, mutual support and cooperation between the two countries in the current context.
President Phuc laid wreaths at the monuments of Cuban national hero José Martí and President Ho Chi Minh. He also visited the Centre for Genetic Engineering and Biotechnology (CIGB) in Havana and Santigo city, where he paid tribute to revolutionary heroes and laid a wreath at Cuban leader Fidel castro’s grave. 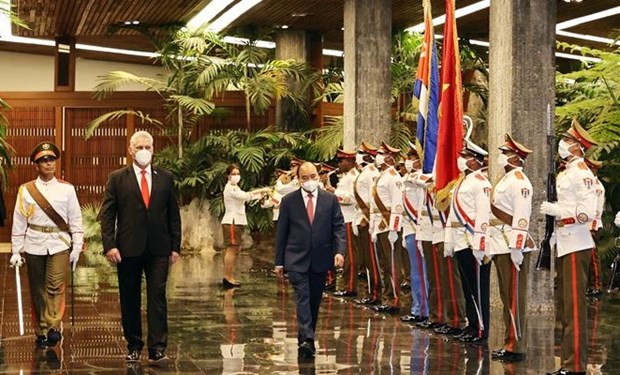 At the welcoming ceremony for President Nguyen Xuan Phuc.
The Cuban President presented President Phuc with the José Martí Order in recognition of the Vietnamese leader’s contributions to the strengthening of the historical friendship, solitarity and cooperation between Cuba and Vietnam.
During their talks, the two leaders reviewed and shared delight at the growing ties between the two countries, reaffirming the determination to accelerate bilateral special relations to a new development period on the basis of mutual political trust, as well as wish to expand partnership in all fields. They also briefed each other on the situation in each country and discussed regional and international issues of mutual concern.
They underlined the special characteristics of the bilateral relationship, which has been built on the solidarity and mutual admiration as well as similarity in ideology and principles.
Vietnam and Cuba agreed to expand, foster and further deepen their fraternal relations, solidairity and comprehensive cooperation to make more positive contributions to the national defence and construction in each country as well as the stability and development in the two regions and the world as a whole.
Both sides expressed belief that future generations of both nations will remain loyal to the everlasting heritage owned between the two peoples, maintain their solidarity and continue to walk hand in hand in the cause of national construction and protection of socialism in each country for a fairer and more sustainable world.
The two leaders informed each other on the outcomes of the congresses of the two Parties earlier this year, and exchanged experience in the path of building socialism on the foundation of the reality in each country. 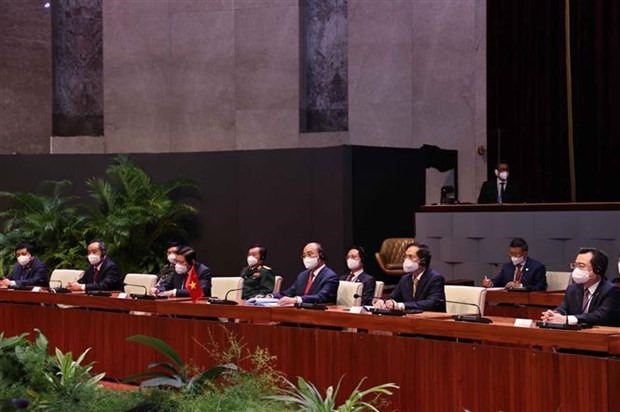 Vietnam, Cuba issue joint statement on President Nguyen Xuan Phuc’s visit hinh anh 3An overview of President Nguyen Xuan Phuc’s talks with First Secretary of the Communist Party of Cuba Central Committee and President of Cuba Miguel Díaz-Canel Bermúdez.
President Phuc expressed belief that the ideology, theory and guidelines adopted at the Communist Party of Cuba (CPC)’s congress in April will help the country continue maintaining development projects in the safeguarding of sovereignty, independence, socialism, democracy, prosperity and stability.
The Vietnamese leader said that he believes under the wise leadership of the CPC, Cuba will overcome the negative effects of the blockade and embargo and continue its national growth for the benefits of the Cuban people.
Vietnam lauded the new Cuban revolutionary leaders inheriting the legacies left by previous generations as well as their commitments to continue to stick to socialism and maintain the fraternal relations and special friendship, solidarity and cooperation between the two countries.
Vietnam spoke highly of the prestige and recognised contributions of Cuba to the international solidarity in COVID-19 prevention and control. Vietnam acknowledged that despite the embargo and conditions of a developing country, Cuba has become the first and only Latin American-Caribbean country to successfully develop three types of COVID-19 vaccine.
Vietnam affirmed its consistent stance of supporting the just struggle of the Cuban people for immediate and unconditional end of ungrounded and unilateral economic, trade and financial blockage against Cuba, opposing the increase of unilateral sanctions against the country and emphasising that these measures have aggravated the socio-economic difficulties facing the Cuban people in the current epidemic context.
First Secretary of the CPC Central Committee and President of Cuba Miguel Díaz-Canel Bermúdez highly valued great attainments of historical significance that Vietnam has gained over the past 35 years as well as the strong and comprehensive growth of Vietnam over the recent years. Cuba believes that Vietnam will successfully implement the Resolution of the 13th National Party Congress, and complete all targets set in the socio-economic development strategy for the 2021-2030 period, he said. The Cuban leader also lauded Vietnam’s foreign policy of peace, independence, self-reliance and international integration as well as its contributions to peace, stability, cooperation and development in Asia and the world. The Cuban leader also hailed the role that Vietnam played as the ASEAN Chair in 2020 and a non-permanent member of the UN Security Council in the 2020-2021 tenure.
The two leaders concurred that amid the current situation when Vietnam continues to promote "Doi Moi” (Renewal) cause and Cuba continues its socio-economic growth model update, the two countries should maintain exchanges with both online and direct forms, focusing on major areas such as food security, cybersecurity, and communications, while keeping historical memories and close ties in defence-security and external relations, and continuing to increase the exchange among ministries, sectors as well as State and Government agencies.
They underscored the significance of bilateral cooperation mechanisms and shared determination to enhance the efficiency of these mechanisms.
They stressed the need to promote and improve effectiveness of bilateral economic partnership, including the maintaining of stability and diversity of bilateral trade. Cuba lauded Vietnam’s position as Cuba’s most important partner in the Asia-Pacific region, underlining that the country proritises the improvement of business environment to attract more Vietnamese investors. At the same time, Cuba will consider the potential and strengths of each side to expand collaboration in prioritised sectors. The two State leaders upheld the importance of bilateral agreements signed during President phuc’s visit.
They also highlighted the significance of the Vietnam-Cuba partnership amid COVID-19, describing the ties as the model of solidarity in the world and evidence of the special feature of the relations between the two Parties, States and people.
Miguel Díaz-Canel Bermúdez thanked Vietnam for its invaluable support to the country in the field of food security, highlighting the donation of rice and medical supplies of the Vietnamese Party, State and people to the Cuban people since the outbreak of the pandemic.
The Vietnamese President also appreciated the State and people of Cuba for their help to Vietnam in the medical field by sending experts and donating Cuban biological products, and especially providing vaccines against the pandemic.
The two leaders expressed satisfaction at the similarity in the stances on international issues, affirming that international disputes need to be resolved by peaceful means, strictly adhering to the principles of International Law and the Charter of the United Nations.
The two sides agreed that the close bilateral relations between Vietnam and Cuba would contribute to the expansion of Cuba's dialogue and cooperation with other countries and Southeast Asia, as well as between Vietnam and Latin America and the Caribbean. The Vietnamese side welcomed Cuba's accession to the Treaty of Amity and Cooperation in Southeast Asia (TAC).
They acknowledged the role of regional and inter-regional organisations in consolidating friendly, peaceful and cooperative relations based on mutual respect, non-interference and respect for differences and peaceful coexistence, as stated in the Declaration of Latin America and the Caribbean as Areas of Peace.
The two sides reaffirmed the validity of the fundamental principles of the Non-Aligned Movement (NAM); the movement’s goals, principles and role in the current international context need to be thoroughly respected; as well as appreciated the movement's contributions to the defence of International Law. They also reaffirmed the commitment to promoting peace and international security and disarmament, especially disarmament of nuclear weapons. They welcomed the signing and ratification of the Treaty on the Prohibition of Nuclear Weapons. 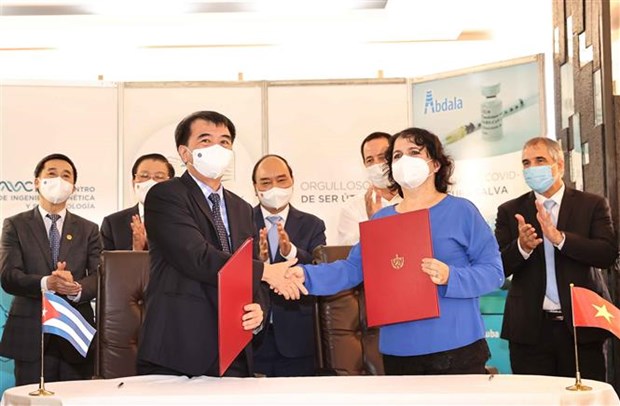 Vietnam, Cuba issue joint statement on President Nguyen Xuan Phuc’s visit hinh anh 4President Nguyen Xuan Phuc witnesses the signing of cooperation agreements between the two countries.
The two leaders reiterated that Vietnam and Cuba continue to promote participation in human rights forums at the United Nations and oppose the trend of politicisation, polarisation and discrimination against developing countries, as well as selectivity and double standards for meddling in the internal affairs of countries, saying that only through cooperation and dialogue on the basis of mutual respect can promote human rights for all.
Vietnam reaffirmed its support for efforts to resume dialogue and expand cooperation between the US and Cuba on issues of mutual concern, on the basis of equality, respect for sovereignty, independence, and political institution of each country.
The two sides will continue to support each other at international organisations and multilateral forums to which they are members. They agreed on the importance of effective implementation of the Sustainable Development Goals and the 2030 Agenda for Sustainable Development and continue to actively contribute to climate change response efforts.
The two leaders highly appreciated the results of the visit, considering it a milestone of special significance. This was the first visit by a head of state since the outbreak of the pandemic and was conducted on the occasion of the 61st anniversary of the establishment of diplomatic relations.
They also expressed their pride that the visit was made close to the 48th anniversary of the historic visit by Commander-in-Chief Fidel castro Ruz to Vietnam in September 1973 and 55 years since President Ho Chi Minh received General, Minister of Revolutionary Armed Forces Raul castro Ruz in October 1966.
The two leaders reaffirmed that Vietnam-Cuba solidarity will help the two countries to achieve the dual goals of defeating the pandemic and promoting comprehensive socio-economic development, and continue to build socialism for their current and future generations.
President Nguyen Xuan Phuc invited First Secretary of the Communist Party and President of the Republic of Cuba Miguel Díaz-Canel Bermudez to pay an official visit to Vietnam and the invitation was accepted the invitation with pleasure. The visit will be arranged through diplomatic channels.
VNA 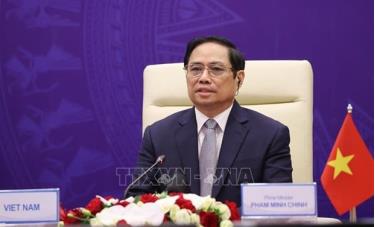 Prime Minister Pham Minh Chinh will lead a high-ranking Vietnamese delegation to attend the 38th and 39th ASEAN Summits, ASEAN summits with partners and the third Mekong-Republic of Korea (RoK) Summit via videoconference from October 26-28 at the invitation of Sultan of Brunei Darussalam Hasanal Bolkiah – Chair of ASEAN 2021.

Yen Bai moves to shore up tourism in "new normal" 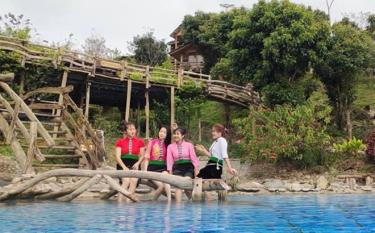 Since the beginning of 2021, the tourism sector has been severely affected by the COVID-19 pandemic. The suspension of flights, social distancing, travel restrictions, and concerns caused by the pandemic have led to a fall in the number of visitors to Yen Bai province, with international tourists dropping by 94.4 percent year on year. 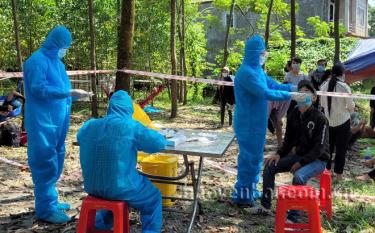 Yen Bai has so far recorded no local COVID-19 transmissions, which was partly attributable to efforts by departments and agencies, and the public's compliance with authorities’ directions and high awareness of disease prevention. Local residents feel happy when living a completely normal life and do not have to suffer disadvantages due to social distancing. 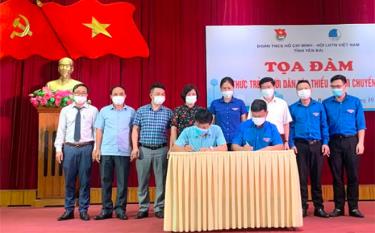