The park and road running along the sea have served as a venue to educate young generations about revolutionary traditions, and a meeting place for officers, soldiers and residents on the island.
The highlight of the 400sq.m park is General Giap’s statue seeing Vietnam’s sea and sky. The statue, 1.76m high, was completed in December 2015 by sculptor Le Dinh Bao.
As many as 300 photos printed on ceramics featuring the life of General Giap and his attachment to the Vietnam People’s Army are hung on the wall behind the statue, which measures 24m long and 2.5m high.
In front of the park is a road named after the General running about 500m, connecting the park and Linh Son pagoda on Son Ca island. 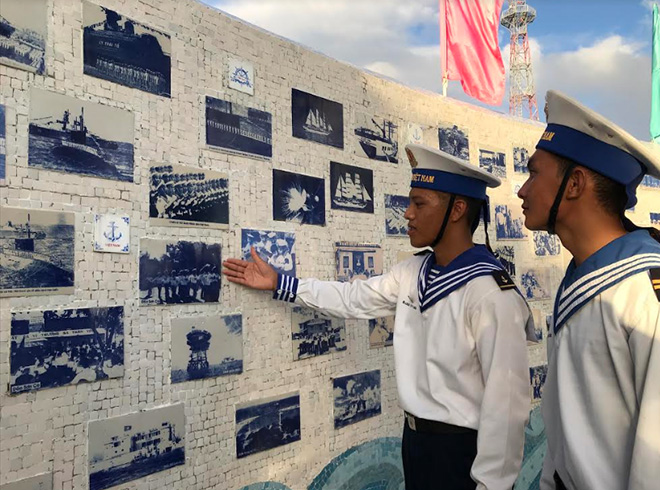 Young soldiers study the glorious history of Vietnam People’s Navy at the statue area.
With various types of plants, the park and the road have significantly contributed to giving a facelift to the island.
The statue has also helped to build and consolidate confidence of officers and soldiers who are safeguarding national sovereignty over sea and islands, and affirm Vietnam’s maritime sovereignty.
Thien Cam